Hydraulic jacks are incredible pieces of machinery. They magically transform a flick of the wrist into vehicle-lifting power. Useful in emergencies and routine maintenance, it’s hard to overstate the importance of a hydraulic jack.

But sometimes they have problems. It’s hard to fix terrible corrosion and rust, but quite often, the problem is that they are out of or low on oil.

Filling a hydraulic jack with oil can save your jack and get it functioning again. This post is going to show you how. 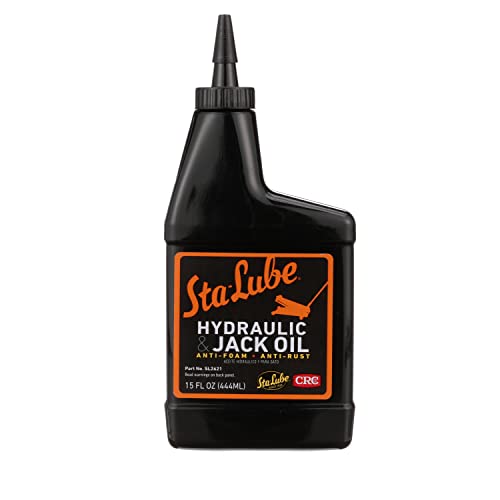 Sta-Lube Hydraulic & Jack Oil - 15 Fl. Oz, Anti-Foam, Anti-Rust 20W Non-Detergent Oil, Amber Check Price on Amazon
We may earn a commission if you buy, at no added cost to you.

How Do You Fill a Hydraulic Jack With Oil?

Filling a hydraulic jack with oil is a simple process for most small household jacks. A hydraulic jack is refilled with oil regularly and takes about 10 minutes to complete.

To fill a hydraulic jack with oil, follow these simple steps:

How Do You Fill and Bleed a Hydraulic Bottle Jack?

Filling the jack’s oil doesn’t fix every problem. In that case, you might have to bleed the hydraulic fluid in the jack. You will remove air bubbles and refresh the jack’s oil by flushing oil through the system.

I found that one of my jacks wouldn’t go fully up anymore. The oil level appeared full until I removed the plug and tried extending the jack. A giant bubble came out, and the oil level dropped.

I was able to save my old jack and didn’t have to purchase a new one. How do you fill and bleed a hydraulic bottle jack? How do you bleed a jack?

Luckily, bleeding a jack is easy. Follow the same process outlined above, but when you think the jack’s oil is full, keep the plug off and continue to extend and retract the jack. Repeat 2-3 times and add oil if necessary.

This process is also known as purging, burping, or flushing the system. It’s all about how do you get air out of a floor jack. Before filling a hydraulic jack with oil, you can burp it, bleed it, or flush it to remove air bubbles.

In most cases, this will feed oil through the system and remove air bubbles trapped in a hydraulic jack.

Then locate the oil fill plug and top off with oil, following the usual process.

How Do You Fill a 20 Ton Bottle Jack?

There is a wide variety of hydraulic jacks. Some are bottle jacks, ranging from a measly half-ton rating to heavy weights, like 20 tons.

The good thing is that filling a hydraulic jack with oil is usually the same process for most of these jacks. How do you fill a 20-ton bottle jack? Start by locating the oil fill plug and inspecting for a separate drain plug.

If you find a drain plug, take that out and drain the old oil. Replace the drain plug.

Locate and remove the oil fill plug. Add oil until it is full while extending the jack to its full height. Cycle the jack up and down 1-2 times to make sure you get rid of all air bubbles.

Where Do You Put Oil in a Floor Jack?

Sometimes finding the place to put oil in your hydraulic jack isn’t clear. If you can’t find a removable, small rubber piece, your oil fill plug is probably a bolt. It might have a hex head for an Allen wrench or a screwdriver head.

You shouldn’t have to take your jack apart entirely, but you might have to remove a couple of screws to get under the cover.

How Do You Fill a Hydraulic Pallet Jack?

Hydraulic pallet jacks are like most other jacks we’ve discussed. Follow the usual process for how do you fill a hydraulic jack with oil. Be sure to test it by fully extending and retracting it before use under a load.

How Do You Know if Your Jack Is Overfilled With Oil?

When you fill a jack with oil, you should pay attention to the labels on the device. In many cases, there is just a hole that you fill to the brim.

It might sound obvious, but if it overflows when you use it, there is probably too much oil in the system. Open the oil fill plug and pump it until the excess is gone. Afterward, follow the process of how do you fill a hydraulic jack with oil.

Others have a small holding tank for the oil with visible markings showing the proper amount of oil. If your jack has those markings, make sure to stick to them. Don’t go well above or under what it says is full.

How Do You Prime a Hydraulic Jack?

Priming a hydraulic jack is a quick process you can take before using your jack to make sure it is working. I like to do this before using a jack that I haven’t used in a long time.

Most jacks are primed and ready to go, but if you want to ensure oil reaches everywhere and the jack is functioning, do a test run. Checking your jack is working first will potentially save a messy clean-up.

Fully extend the jack while it’s on the ground with no load. Once fully extended, retract the jack by bringing it back down. This will help oil reach every spot before adding a heavy load on top. You can also see if your jack isn’t extending fully, which might be due to low oil.